The Life, trial, and execution of Captain John Brown, known as “Old Brown of Ossawatomie,” with a full account of the attempted insurrection at Harper’s Ferry

Harpers Ferry Under Fire: A Border Town in the American Civil War

Harpers Ferry Arsenal and Joseph Perkin: The Classic Arms of the Early Years

The Life, trial, and execution of Captain John Brown, known as “Old Brown of Ossawatomie,” with a full account of the attempted insurrection at Harper’s Ferry 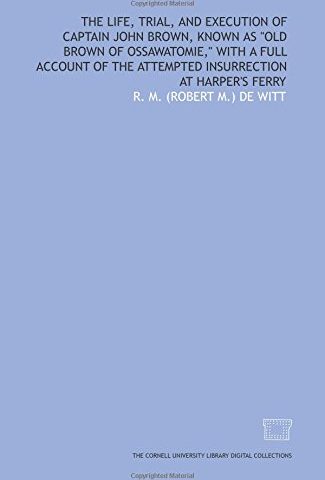 The insurrection at Harper’s Ferry, Sunday night, Oct 16, 1859: The first active movement ; Arrest of Colonel Washington and others ; The stoppage of the railroad train ; The state of affairs at daybreak ; Early casualties ; Arrival of troops-fist fightings ; Rescue of the workmen ; Later casualties ; The night scenes ; Negotiations next morning ; The building stormed ; Appearance of the prisoners ; Brown’s conversation ; Capture of arms ; Treatment of Brown’s prisoners ; Brown’s papers and stores ; The names of the insurgents.

John Brown was tried in the Circuit Court of Jefferson County for treason, for conspiring with slaves to produce insurrection, and for murder.