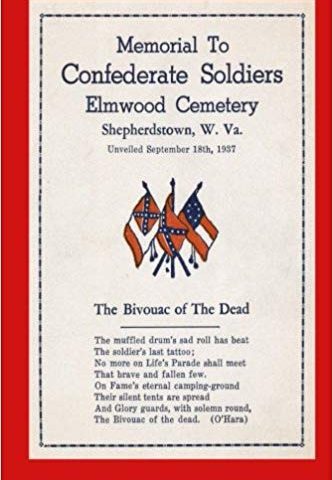 Bivouac of the Dead

On September 18, 1937 – 75 years after the bloodbath at Sharpsburg (Antietam) – the people of Shepherdstown, West Virginia, dedicated a lovingly fashioned monument to Confederate soldiers from the area. The Memorial to Confederate Soldiers was installed in historic Elmwood Cemetery and today remains a treasured part of the area’s history and legacy.

The booklet that was privately printed and distributed to participants and attendees of the 1937 cemetery has been out of circulation for many years. It has been reproduced in its entirety here for the first time. With a fresh layout, corrections to typographical and substantive errors, and a table of contents, the booklet (with its exhaustive lists of soldiers from specific Confederate units within the Stonewall Brigade) is once again available as a historic resource.