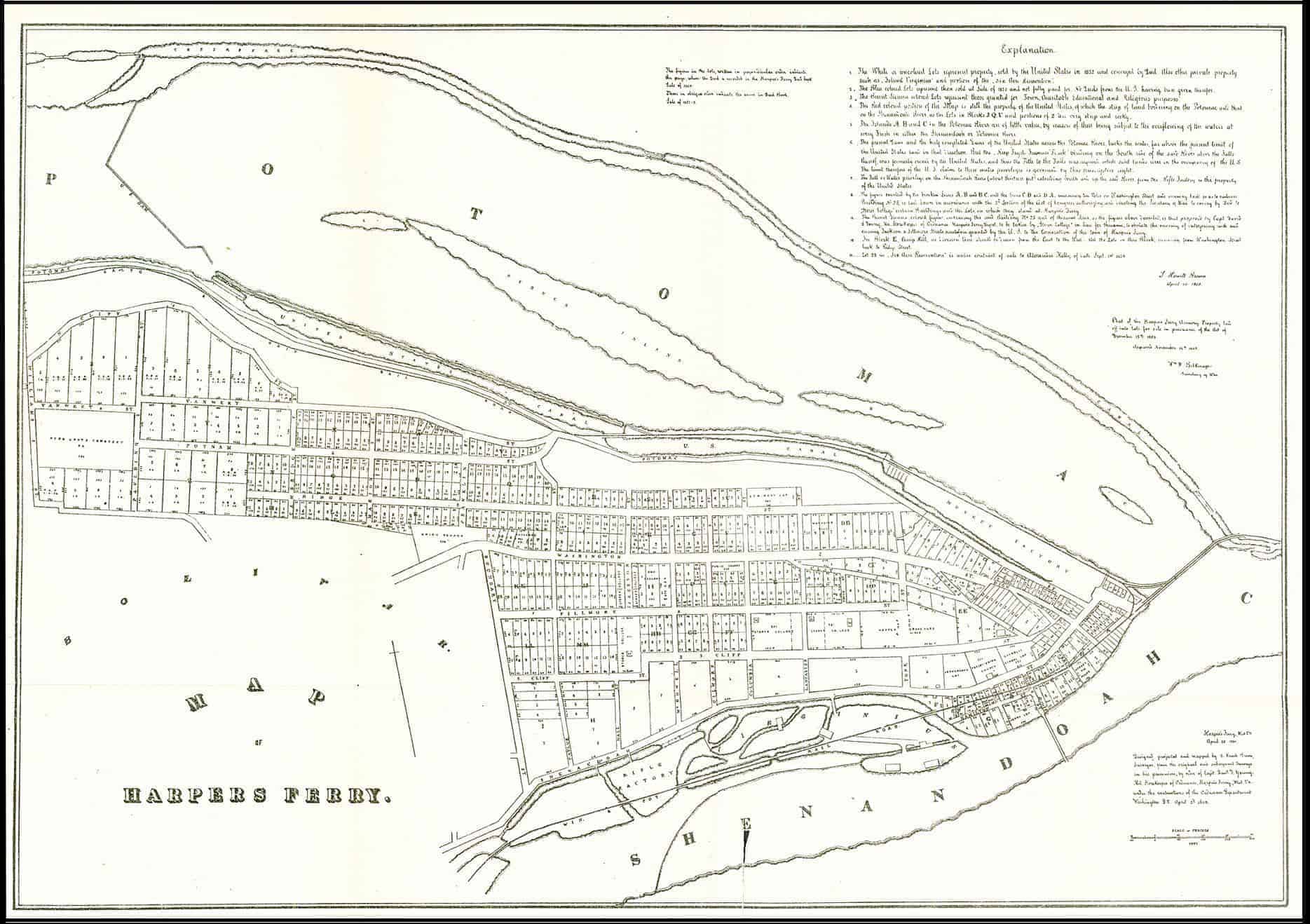 A Short History of The U.S. Armory and Arsenal at Harpers Ferry

You can almost hear them speak…

The Beginnings of an Armory

I n 1792, Congress authorized the construction of two National Arsenals for the storage and issuing of arms to military forces. It wasn’t until 1794 that Congress provided funds for these two arsenals to build and manufacture firearms under an act for “erecting and repairing of Arsenals and Magazines”.

Springfield, Massachusetts was chosen for the Northern Armory and Arsenal, while Harpers Ferry was chosen for the Southern location under direct order of President George Washington. Harpers Ferry was not only an extremely strategic location as a result of the mountain gap and confluence of the Shenandoah and Potomac Rivers, but also due to its abundant water supply for water power.

In 1796, the U.S. Government purchased a 176 acre parcel of land from the heirs of Robert Harper. When this property was sold, the Wager family remained in ownership of the ferry, and a portion of land which which was to be used as both commercial and residential property. According to William Theriault's, book, History of Eastern Jefferson County, the government granted owners of this privately held land a type of monopoly over other area businesses.

Construction of the Armory and Arsenal began sometime around 1798, although sources suggest several different years ranging from 1797 to 1799. 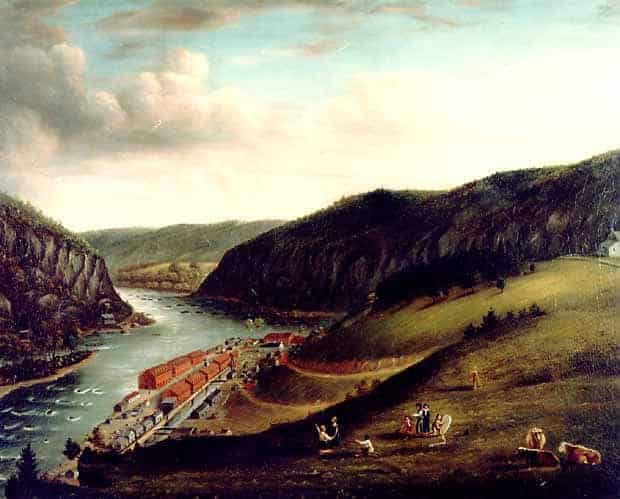 The first guns produced from the Harpers Ferry Armory were manufactured and assembled in 1799. The armory produced ammunition and spare firearm parts, as well as manufactured muskets, rifles, and pistols.

At this time, the Armory was a single-room shop with only twenty five workers and few pieces of machinery, powered by a canal explicitly used for water power to the Armory. Even with so few workers, it has been estimated from production figures that the small armory was producing at the rate of about 10,000 firearms a year by 1810.

Until the emergence of the C&O Canal and B&O Railroad in the early 1830's, relationships between the armory and its surrounding localities appear to have been poorly controlled. Under direction of James Stubblefield, the armory made poor use of local resources, instead choosing to accept monetary gifts from outside companies and use products from only a few "inside" local businessman.

A detailed discussion on the armory's use of resources by William Theriault can be read here.

The armory did not employ, nor use the resources of, many Oak Grove [Bakerton] residents. Instead, ties between Oak Grove and Antietam continued to flourish, while ties between Harpers Ferry and the same area remained strained. 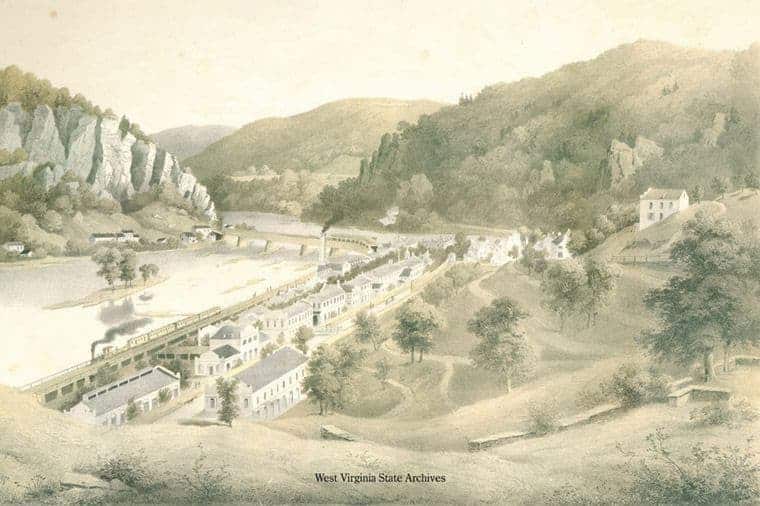 A view of the Armory circa 1857. Notice the renovations and enlargements made between 1824 and 1857. Image from the West Virginia Archives, originally published in Album of Virginia, by Ed Beyer

Y ears of poor management, insufficient water power, and meager government funding wore heavy on the Armory. In 1844, plans for a complete site renovation were drawn.

Between 1845 and 1854, the Armory more than tripled in size with the addition of seven workshops, the installation of 121 new machines, and a canal enlargement. The Armory now employed over 400 men — a monumental increase compared to the mere 25 men of yesteryear.

Unfortunately, the newly renovated armory would soon see its fair share of trouble, ultimately leading to its demise. 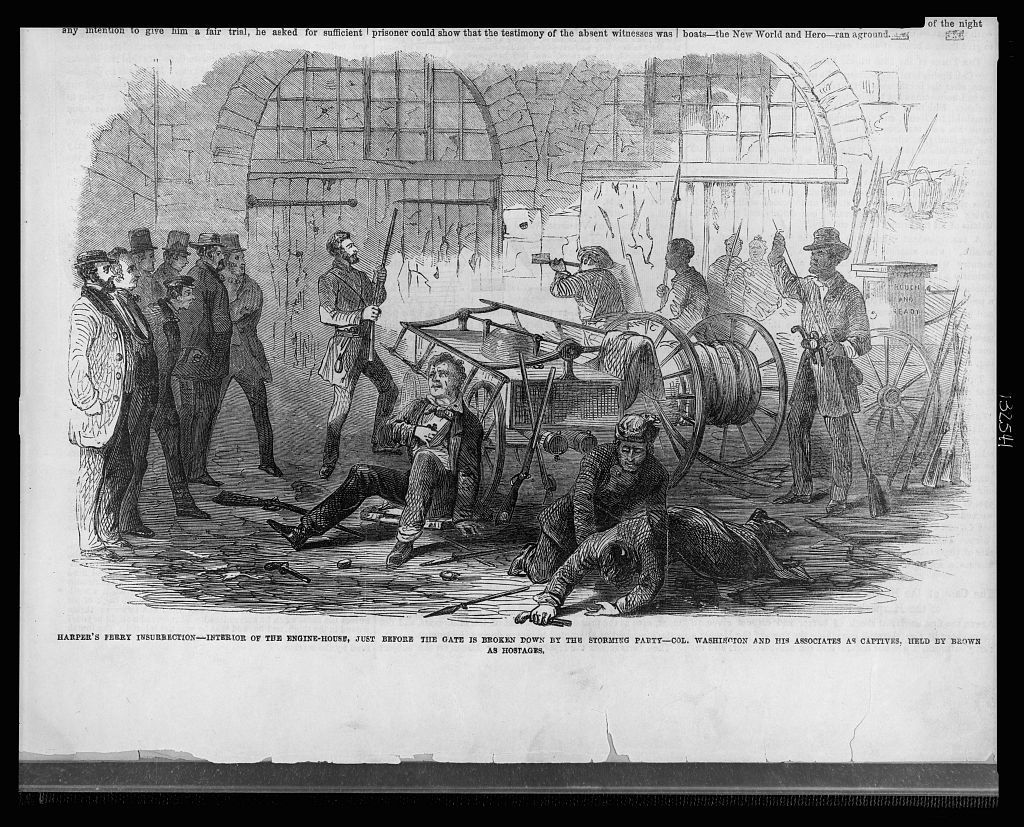 O n October 16, 1859, John Brown and 22 men attacked the Federal Arsenal at Harpers Ferry to seize both ammunition and arms from the facility. He planned to arm slaves in the region in order to start a large scale southern slave revolt.

Brown sent men into the surrounding areas to arm the slaves, believing that the slaves would support his cause and come to his aid -- soon, Brown was surrounded by Marines under the command of Robert E. Lee and J. E. B. Stuart. The soldiers stormed the engine house where Brown and his men were taking refuge, killing eight of Brown's men and two of his sons.

While Brown was able to hold the armory for 36 hours, he wasn't able to escape the clutch of Harpers Ferry.

S oon after Brown's famous raid on Harpers Ferry, on April 16, 1861, Virginia politicians voted in favor of succeeding from the Union to join the newly formed Confederate States of America. With a civil war having erupted just days earlier, and Harpers Ferry being located within the bounds of the State of Virginia, the Union could not afford to lose their Armory and Arsenal, nor arm the Confederacy.

While Union soldiers, under the command of Lt. Roger Jones, attempted to defend the Armory, a looming takeover by over 300 Virginia militiamen forced Jones and his company to move out of Harpers Ferry. In an act of desperation, on the night of April 18, 1861, Union troops set fire to the Arsenal and Armory at 10 p.m. 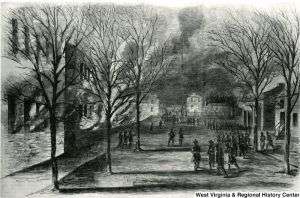 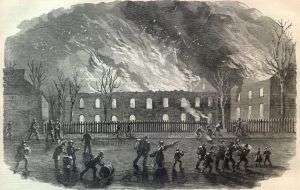 Alongside Confederate soldiers, townspeople worked tirelessly to extinguish the flames. After this act, some of Jones' men deserted their post and returned to Harpers Ferry to help slow the fires.

Many locals viewed the act by the Union as savage, and it was a turning point for some whom had not yet taken sides. For many locals and townspeople, the burning of the armory pushed them to take either the side of the Union or the side of the Confederacy, although by many accounts, rage focused on the United States government.

In an eyewitness account, which can be read here, it was noted that many men, women, and children attempted to save (or maybe loot) some of the "muskets, bayonets, and other military equipments". The account further details that nearly all of the muskets in the Arsenal were destroyed -- 15,000 arms in total.

Much of the Armory portion of the complex was able to be saved, including some 2,000 completed, or nearly completed muskets, equipment, and materials. The items which were able to be saved were shipped South during the first weeks of May, 1861. Supervising the move was Col. Thomas Jackson. Most of the machinery was sent to Richmond, Virginia and Fayetteville, North Carolina. Many of the armory's previous employees followed suit, to make arms for the Confederacy.

Extracts of the Senate Report detailing the destruction of the armory can be read online at the West Virginia State Archives. 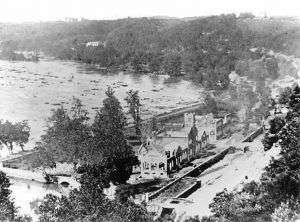 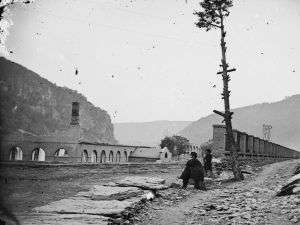 The 1861 destruction of the armory caused industry in Harpers Ferry to collapse, and left many unemployed men with large families and an uncertain future.

In a report for the National Park Service written by Andrew S. Lee, we read a plea for help by a former skilled armory worker:

David, we are in dreadful condishon [sic] here. Our armory is burnt and we have no money and no nothing else. At this time there is about five thousand soldiers at this place and more coming. Our men is leaving – them that have money enough to carry them away…We have two months work that we expect to lose. Most of the hands here have not a cent and I am…now in a suffering condishon [with] a large family, no money, and no work.