The unveiling of Elizabeth Slavin

This research question is currently being actively researched.

Following is a continually updated report on the current findings of Annie Gertrude Murphy's parentage. This is being actively researched. Please continue to check back for updates.

At the time of her death, Annie Gertrude Murphy Welsh’s son, William Franklin, reports that Annie’s father was B. Murphy. No mother is listed. On this certificate and all censuses with Annie as an informant, Annie reports her place of birth as Maryland. According to available evidence, Annie was most likely born on September 13, 1840, in Maryland to Irish immigrant parents. Annie married Thomas Buchanan Walsh at St. Peters Roman Catholic Church in Harpers Ferry in 1859.

Washington County, Maryland is the most likely location of Annie’s pre-marriage residence and birth. Thomas, as a laborer, most likely at the Flanagan Quarry or Friend’s Ore Bank, would have had access to the canal for travel. Thomas’s brother, James, and nephew, Michael were both boatmen prior to his marriage to Annie. It is not unlikely that Thomas perhaps made a few trips himself or to accompany his family members. Furthermore, it is known that the Bakerton area (then Oak Grove) had strong ties to Washington County, Maryland. So much so that travel between Maryland and the Bakerton area was frequent, while during this time travel between Bakerton and neighboring areas, such as Shepherdstown and Harpers Ferry, was not as common, both due to rough travel routes and dissension between the area residents. River travel during this time period was much quicker than land.

This is likely how Thomas met Annie.

The most likely candidate for “B. Murphy”, Annie’s father is that of Bartholomew Murphy. According to his naturalization papers, Bartholomew was born in County Kerry, Ireland in 1819. Departing at the port of Cork, he arrived in New York in 1838. He petitioned for naturalization on October 3, 1848, and was naturalized in Washington County, MD on August 25, 1851, as witnessed by Henry Morrison.

In the 1850 census, the only “Ann Murphy” in Washington County, MD is a 12-year-old girl, born of Ireland, who is living with the Irish immigrant family of Michael and Mary Murray. The family and Ann were enumerated in District 2 of Washington County. Although the two Murray children in the household were attending school, little Ann was not.

According to an 1859 map, “District 2” ran from in front of Dam No. 4, near Middlekauff’s Dam, past Williamsport.

Also enumerated in District 2 was 35-year-old “Bart” Murphy, an Irish born laborer. Bart was living in the household of John and Nancy Gray. Other than the couple’s children, also present were brothers William and David Groom, and Irish-born Cornelious Coner. All of the men in the household were laborers. The household neighbored the home of the manager of the ironworks.

It is interesting that Bart was boarding with a family of the last name of “Gray”. After Annie’s marriage, Annie and Tommy took in a young Irish girl by the name of Elizabeth Slavin, and she married a James Walsh at St. Peters from Zaleski, Ohio, with no known ties to the Harpers Ferry area. Elizabeth’s mother’s maiden name was “Grey”.

In 1831, a newspaper advertisement was run by a group of contractors for the B&O Railroad looking to employ 1,700 laborers. John Gray was one of those contractors.

Could Annie’s mother have been a Murray? Perhaps the child was taken in by her mother’s brother after the early death of her mother? Perhaps “Mary Murray” was the sister of one of Annie’s parents? Or, perhaps, her father sent her to be raised by an Irish family that he befriended that could provide for her better than he could himself, in exchange for her help around their home?

According to his draft registration, Stephen J. Murray, son of Michael and Mary Murray, was an armorer at Harpers Ferry. In 1870, he was a machinist.

Since Billy was aware of his grandfather in some form, Annie must have known her father and talked about him. It is likely Annie did not remember her mother since it appears she did not speak of her to Billy.

Another possible candidate is Barnahas Murphy, most likely a canal worker indentured to John Flore. However, other than letters from Ireland at the postoffice, Barnahas remains elusive.

The Road From York to Harpers Ferry

The Welsh & Flanagan Families on The C&O Canal 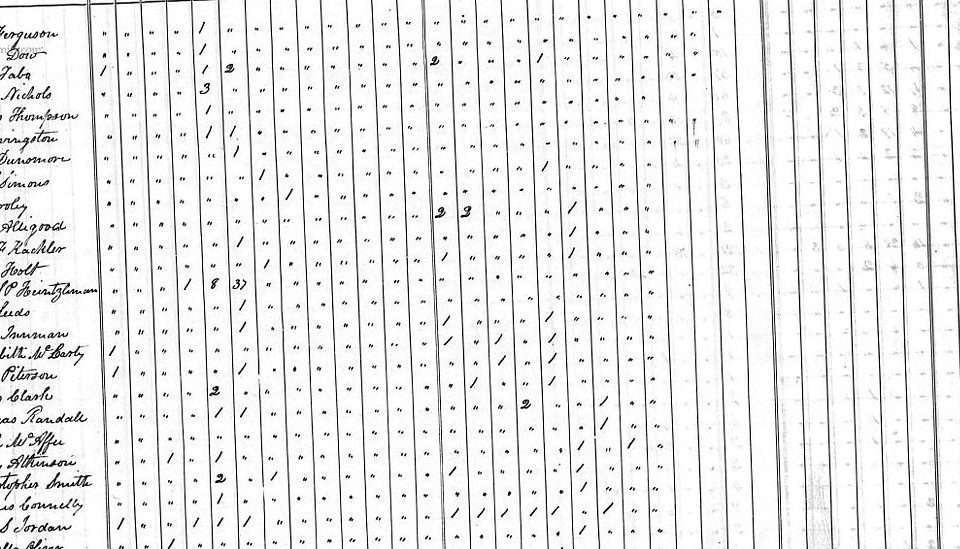